For many, in the past, the Church committed an error by counting John’s gospel along with the other canonical gospels. The distrust of a theology so diverse from that of the other evangelists, with its radical opposition to the temple and every form of religious institution (Jn 4.21), and, with the welcoming of Samaritan heretics, the community born from John’s gospel was not only rendered repugnant for the Jews, but was also considered suspect in the eyes of the nascent church.

Under the pontificate of Pope Zephyrinus (199-217) there were even those who rejected the gospel, like the Roman priest Gaio, attributing it not to John but to the heretic Cerinthus. In fact, the oldest comment on the gospel of John was written by Heracleon, a disciple of Valentinus, founder of a famous Gnostic sect. The gospel of John was welcomed by both Gnostics and heretics, and yet it was seen with suspicion in more orthodox ecclesiastical circles who suspected it of being an anti-institutional gospel. John’s gospel took an opposing position to the hierarchical structures that were being formed in the Church. In fact, the community of John is formed by ‘one flock, one Shepherd’ (Jn 10.16). The existence of the believing community (flock) contains in itself the presence of the Lord (shepherd) and forms the new sanctuary which radiates the love of God for all humanity (Jn 17.22-23). The work of the community-sanctuary is that of going to meet those who were driven out by the religious institution (Jn 9.22, 35; 12.42; 16.2) and welcoming those who feel unworthy to draw near to the Lord. To all these people, the Lord and his flock make the word of the Shepherd resound. He invites us to unite in one community which is composed not of the Lord’s servants, but his friends (Jn 15.15), brothers and sisters (Jn 21.23), where one commandment of mutual love applies (Jn 13.34).

Considered a little inappropriate for disciplining the life of believers, John was classified as a ‘spiritual gospel’ as early as 200 by Clement of Alexandria (cf. Eusebius of Cesarea, Storia Ecclesiastica 1,6,14,7). It became a heavenly gospel for use and consumption by mystics and not for the masses. It was adapted for those who were attracted to the things of heaven and not for those people that dirty their hands with the things of earth. So, the gospel of John has been accompanied throughout the ages with the reputation of being a difficult work, reserved as nutrition for the ‘spiritual’ person, and thus neutralizing the explosive impact that this gospel can provoke in the lives of believers leading them into complete liberation: ‘Know the truth and the truth will make you free’ (Jn 8.32). In this gospel the understanding of Jesus is undoubtedly formulated in the most profound way in all of the New Testament. If the other evangelists present Jesus as the Son of God (Mt 14.33; Mk 1.1; Lk 1.35), John is the only one that attributes the term God to Jesus: ‘My Lord, and my God!’ (Jn 20.28). But which God?

John authoritatively declares ‘No one has ever seen God’ (Jn 1.18; 5.37; 6.46), inviting the believer to fix herself solely on Jesus, ‘the only son, who is close to the Father’s heart, who has made him known’ (Jn 1.18). When Philip asks Jesus to show him the Father, Jesus responds ‘Whoever has seen me has seen the Father’ (Jn 14.9). For John, Jesus is not equal to God, but God is equal to Jesus.

The evangelist invites the reader to rid herself of every image or concept of God that is not found in the figure of Jesus, in his life and in his teaching. Every image of God, born from the religious tradition and spirituality, that does not coincide with Jesus is eliminated, however incomplete, limited, or false. The God that Jesus reveals cannot be known through doctrine, but rather through his works: ‘Believe me that I am in the Father and the Father is in me; but if you do not, then believe me because of the works themselves’ (Jn 14.11). The only criteria to verify the divinity of Christ are his works, the same ones of the Father. And the works of Jesus are all in favor of humanity, its life and happiness.

Through the themes of Creation (Genesis) and of Liberation (Exodus), John presents Jesus as the fulfillment of the hopes of the old covenant. Christ is announced as the fullness of life and of light: ‘In him was life and the life was the light of all people’ (Jn 1.4). In his gospel, the evangelist presents a crescendo of this life and this light ‘that illuminates everyone’ (Jn 1.9), through works that gives back, communicates, and enriches the life of every person, independently of their moral or religious condition. The life-light that Jesus transmits, fully responds to the desire for fullness of life that everyone possesses, which expands more and more and ‘shines in the darkness’(Jn 1.5), completely liberating humanity from the dominion of death and darkness. This crescendo of light will be at times so dazzling that it will be intolerable for those that live in the darkness (Jn 3.20) and are themselves darkness: the religious leaders. In fact, it will be them that will not tolerate the intensity of the light that emanates from Jesus the Man-God, ‘light of the world’ (Jn 8.12; 9.5), and it is they that cry out to Pilate: ‘Away with him! Away with him! Crucify him!’ (Jn 19.15). ‘He who takes away the sin of the world’ (Jn 1.29) has been taken from the world by accomplices of this sin: the son of God did not die because this was the will of the Father but rather for the convenience of the priestly caste in power (Jn 11.50). 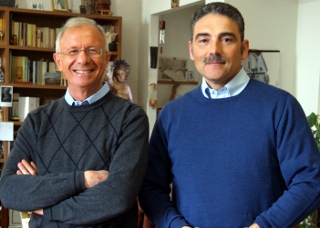 The madness of the Messiah

For John, in Jesus the Man-God is manifested the fullness of the love of the Father, which is not humanity’s rival but its ally. The God-who-is-Love does not dominate humanity, but renders it possible, He does not absorb it, but rather merges with humanity in order to communicate the fullness of his divine life (Jn 17.22). A God who does not ask for offerings because it is He that offers Himself (Jn 4.10), does not want to be served because it is He that serves humanity (Jn 13.14), who asks for a new relationship with him, not already as His servants, but as His own children.

This offer will not be welcomed, and the long awaited Christ will be refused, contested, slandered and in the end assassinated: ‘He came to what was his own, and his own people did not accept him’ (Jn 1.11). The will of God is that every person becomes his child (Jn 1.12) will eventually be considered blasphemy, a crime punishable by death according to the religious authorities that reject Jesus and his message in the name of the divine Law: ‘We have a law, and according to that law he ought to die because he has claimed to be the Son of God’ (Jn 19.7).

But for the evangelist the Law of God does not exist: ‘God is Love’ (1 Jn 4.8) and love cannot express itself through laws, but only with acts that communicate life to people. There is no possible conciliation between the love of the Father and the Law of God. For Jesus, the Law invoked by the leaders of the people is nothing but an empty container that hides the pretense of domination and power by the religious authorities: the proof is that they do not ever invoke the divine Law in favor of the people but always for their own advantages (Jn 7.19). The Law of God is adopted by religious leaders to defend their shaky theories passed off as the will of God, in order to oppress the people and rule the roost so that the people cannot have an opinion other than what the authorities express (Jn 7.48).

The authorities would have been able to tolerate a reformer or a prophet, one sent by God to purify the Temple, the priests, the worship and also the Law—which had by now become tangled up and impracticable—but Jesus no, he was not acceptable. He was not a prophet nor was he sent by heaven, he did not move in the realm of the sacred, but left it altogether. Christ is the very manifestation of God among humanity and he did not come to purify the religious institutions but to eliminate them. He denounced all those beliefs and acts of worship called religion which not only does not permit communion with God but actually impedes it.

Rejected by his own family, to the point that ‘not even his brothers believed in him’ (Jn 7.5), and abandoned by the majority of his disciples, ‘many of his disciples turned back and no longer went about with him’ (Jn 6.66). For the religious authorities, Jesus is only a crazy person, a maniac. In the accusation made by the leaders, Jesus is a Samaritan (‘Are we not right in saying that you are a Samaritan and have a demon?’ Jn 8.48). This accusation not only contained the contempt that they held towards this people, who they defined as stupid in the Scriptures (Sir 50.26), but he was denounced as if he was a dangerous enemy of God (demon-possessed) and from the same people (Samaritan) that they fought and eliminated. Only a nut, a demon-possessed Samaritan could denounce the religious leaders as sons of the devil and assassins (Jn 8.44) and then hope for the end of the religious institution that believed itself to be willed by God Himself. For this reason they joined forces against Christ with all their might because they saw in this man one who ‘made himself equal to God’ (Jn 5.18) and thus a threat to their dominion, their ambitions and their security. The same leaders that make religion a system to satisfy their own frustrated ambitions, make of God a pedestal for their own desire for prestige.

John has written his gospel ‘so that you may come to believe that Jesus is the Messiah, the Son of God, and that through believing you may have life in his name’ (Jn 20.31), assuring that the darkness will not have the better of the light (‘the light shines in the darkness, and the darkness has not overcome it’ Jn 1.5) and inviting every believer to actively collaborate with him who has said: I have conquered the world’ (Jn 16.33), because life will always be stronger than death.

This article was originally published in the October 15, 2007 issue of Rocca which is a periodical that seeks to connect the Christian faith and commitment with a critical approach to reality.

Best wishes and thanks to you all!

To all friends of the Centre for Biblical Studies

The creation of the Centre for Biblical Studies was a new experience for the order of the Servants of Mary.

The Centre is well suited to all those interested in deepening their knowledge of the Holy Scriptures.

Alberto Maggi and Ricardo Pérez Marquez, both Biblicists,all brought their long experience in the biblical field to the creation of start the Centre.

For years they have held Bible meetings in various Italian cities and abroad, enabling them to grasp how big a craving there is in the Catholic Church for the Word of God. At the same time, there has been a shortage of suitable structures for the increasing demand for places and for people devoted to the study and spread of Scripture.